I wish I would have known about the Sailor Cocktail Series pens, years ago. The Sailor Blue Lagoon is one of the prettiest pens I’ve ever seen and apparently a whole lot of people felt the same way, because that beauty is gone for good.

Luckily Tequila Sunrise was not.

I think it’s safe to say that I’ve narrowed down the brand of pens I like to collect first and foremost. And I do spend a lot of time writing with them. Nothing is sadder than purchasing a pen and then letting it collect dust. I feel the same way about more than just pens.

Purchase something to enjoy it, and if it gets scratched, stained, chipped, and frayed along the way, then that only adds to the story of it’s life. 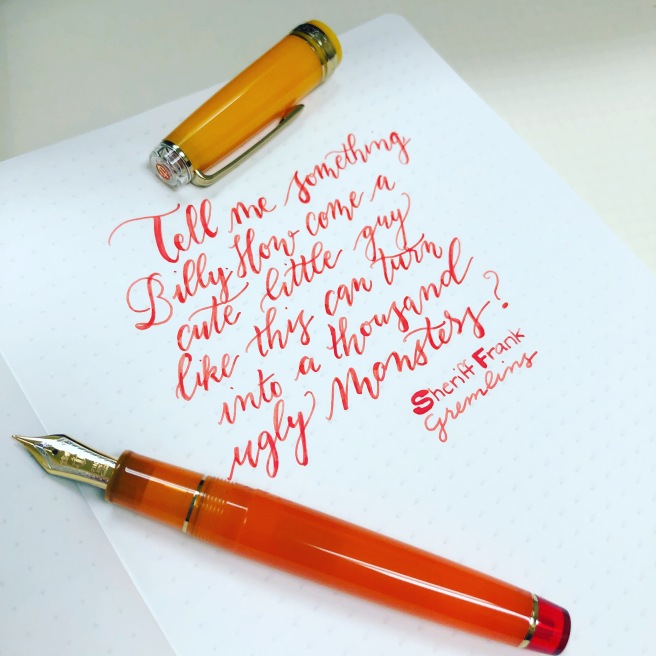 I chose a broad nib, which I would consider more of a medium and as every other sailor I’ve purchased it’s smooth sailing. I’ve never had a problem with a sailor pen right out of the box, and this was no exception. Sailor has this uncanny ability to make their pens utter eye candy. That bright translucent red on the tail end of the pen with the clear tip on the cap, and everything in between. Beautiful!

The ombre orange was genius. Orange to begin with isn’t a color I love, but this pen with all it’s unique bits and pieces was totally beyond my ability to pass up. And it was lucky I purchased it when I did because last I checked it sold out, and unlike other brands Sailor doesn’t seem to be in the game for the repeat. They make a certain amount and they do not go beyond that. Sold out, seems to really mean, sold out.

Fear not though, because if you keep your eyes on Virtual Pen Show, one of these beauties will occasionally pop up. The Blue lagoon and the Apres Ski have both made an appearance there over the last year. But be quick, because they never stay long.

Unlike the Blue Hawaii, tequila sunrise was not purchased using White Rabbit Express, so there was no extravagant service fee, and my shipping was around $18 for a four to five day wait. Overall this pen didn’t set me back more than a couple hundred bucks. Which for a pen coming straight from Japan was what I would consider affordable.

I’ll be keeping my eyes peeled for the next pen in the Cocktail Series that’s for sure!