When I first started using fountain pens (I was very young) they were only popular with the generation that still kept handkerchiefs on hand, folded in a coat or pants pocket. A concept I have always found super disgusting. Back then the only brand that I knew was Mont Blanc. And who the hell could afford those? Not some eight year old girl. But everyone who was anyone somehow had that black and gold pen clipped to the inside pocket of their three piece suit, ready and waiting to be whipped out at a moments notice for that complicated twirling signature that everyone but me seemed to have.

They were so sleek and elegant and cool, that I instantly wanted one.

Today fountain pens aren’t the out of reach item that only some can have and others can covet, today fountain pens are AFFORDABLE! And the internet has made it possible to get them from anywhere and everywhere. So where do you want to spend your money? Do you want to take your chances with a cheap $10 option that might have a scratchy nib, that might have ink that feathers and bleeds through your paper? Or do you want to know that what you’re getting WORKS! 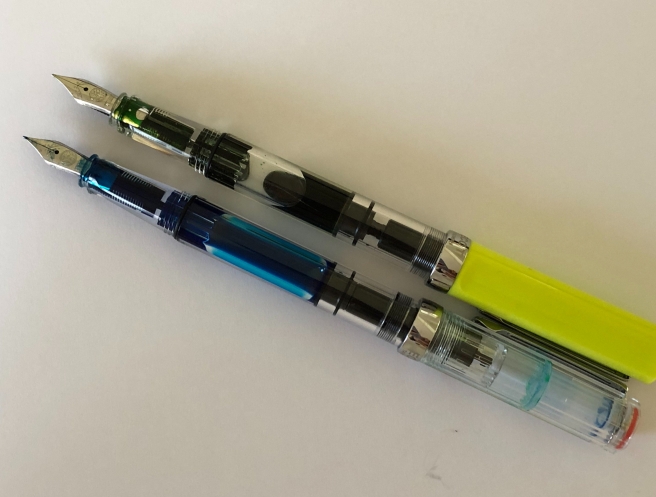 Then I found the Twsbi Eco.

So what’s so great about the Twsbi Eco pen you ask? That’s easy, everything!

And when I walk away from it a whole week at a time, I can come back to it, and it WORKS! I don’t have to tap it, shake it, wet the nib with water or spit, in order to start writing with it. And for someone as lazy as I am, someone who would rather buy an entirely new fountain pen rather than clean my old one, that makes it invaluable.

So I have four.

The Twsbi Mini Vac, the Twsbi Classic, the Twsbi Eco-T and the Twsbi Eco. For a $30 pen the Twsbi Eco is hands down my favorite starter pen. It writes when I want it to, and it looks cool, because who doesn’t think the inner workings of a pen and colorful swirly ink, isn’t cool?